So, I’m asking you to come
along with me as I create a
graphic novel in this space.


I’m asking you to come along with me
as I create a graphic novel.
I’ll let you in on a little secret—this is my first graphic novel—but don’t tell anyone, seriously shhh. I’ve done two children’s books, and one adult coloring book. And have 20+ years of graphic design work under my belt...

But, this is by far my most ambitious story based project. I expect there to be at least 1200 individual panels, each one will have countless revisions and tweaks. Plus, there is the story development, which is no small feat and something I will be learning along the way. If you decide to join this journey I can guarantee that my missteps will provide you with a few good head shakes and maybe a “come look at this idiot” moment or seven.

At this time, I’m sure you are wondering what this graphic novel will be about. Well, let me tell you...
Chasm Moon
On Chasm, a moon divided nearly in half due to mining for Nishati the energy source for interspace travel, Oogie Riff is hired to find a to keep his marriage alive.
This is my one sentence summery as of now. It has evolved and will continue to evolve. I’m set on the location, Chasm and the basic storyline of Oogie chasing after a serial killer.

In the next few posts I will begin to share with you the characters I have so far. I would love to hear your thoughts on those characters. Also, I plan on sharing different drawing techniques and coloring styles I think might work. Right now, I have a logo for the graphic novel (see above), but that is subject to change as well. The best thing about this project is trying out new things and you. I want you to be part of this project. Send your comments to me via the contact page. Let’s try things that will fail and things that will succeed, we are on a journey after all. A big success journey.

Getting Started
I’ve been wanting to do a longer story project for a while now, but was reluctant in tackling something as large as a full-length graphic novel. The main doubt lies in my writing abilities. See, I’m dyslexic. (In case of stairs use fire.) To overcome these doubts, I’ve done and continue to do a number of things. One item which helped me put things in perspective was a graphic in the back of Will Eisners’ book “Comics and Sequential Art”.

Graphic by Will Eisner
In this graphic Will Eisner lays out all the areas someone would need to know in order to create a good comic or graphic novel. Lucky for me, I already have most of the skills through my art school education and years as a graphic designer. However, the one area where I’m missing the goods is the “Language” column.

So, I set a plan in motion get language on my side.
Here is my list:
And that's just to get started.
Now, the next big thing is how will I draw some 1200 different panels, while keeping the characters in harmony from page to page, and not spend the next ten years of my life on just one graphic novel.

For this too, I have a plan. I’ve done a few quick tests already, but my thinking is to build a library of parts for each character. I can then use these parts to assemble each panel. Of course there will be tweaks, but this should get me 80%-90% there. Also, I will be able to share works in progress to get feedback. Woot!

No matter how you look at it though, this project is truly overwhelming when you think about all the steps it will take. I liken it to looking at a 1000 page book... “For fuck sakes look at all the pages!” But, once you get into it and start reading, you simply go page by page until you reach the end.

I plan on doing the same thing, just one step at a time until the graphic novel is complete. Although there is no way in denying it, with this project I’m putting all my baskets in one egg.

And Let the
I had a completely different post written for this week. In fact, I had wrote the damn thing five or six times. I was laying out the backgrounds of the main locations and characters—you were all going to be amazed by my genius.

BUT... after my wife’s feedback on what I had down, it was obvious my thoughts were more like Nathan rambles than biographies. So, instead of sharing character bios at this stage I’m posting these for now.

Concept sketch of Zoe Moore, Oogie’s wife.
Once I’ve developed the characters and the storyline more, I will share them.

I hope you all have a wonderful Thanksgiving. Gobble, gobble.

The Storyline
Over the past few weeks, I’ve modified the storyline a little bit from the original idea. One item that was removed was the serial killer aspect. After exploring that plot point, it was feeling like a story that could take place anywhere, rather than the future world of Chasm moon. So, this is what I’ve flushed out...

Oogie Rift
In the Endera Star System, 500 years into the future on the planet Wattu the war between humans and Sparkers continues. The struggle between the humans and Sparkers intensified once the NishCorp discovered the galaxies largest deposit of nishati, the only resource known to allow for interspace travel on a moon of Wattu called Chasm.

In order to mine Chasm, NishCorp setup their headquarters on Wattu and forced the Sparkers into hiding on Bulan, a rocky desolate moon. A recent string of mine worker deaths at NishCorp is being attributed to the on going conflict between the humans and Sparkers.

NishCorp has hired a private investigator, Oogie Rift, a human who was raised by the Sparkers to find out who is behind the deaths. If the Sparkers are the ones doing the killings it will give the executives at NishCorp the authority to finally destroy the Sparkers once and for all.

As Oogie digs deeper into each death, it becomes apparent that the Sparkers are being setup. So, now Oogie must find enough proof to stop the NishCorp before they eradicate the only family he has known, the Sparkers.
Hopefully, this starts to paint the picture more. I would like to hear your comments. 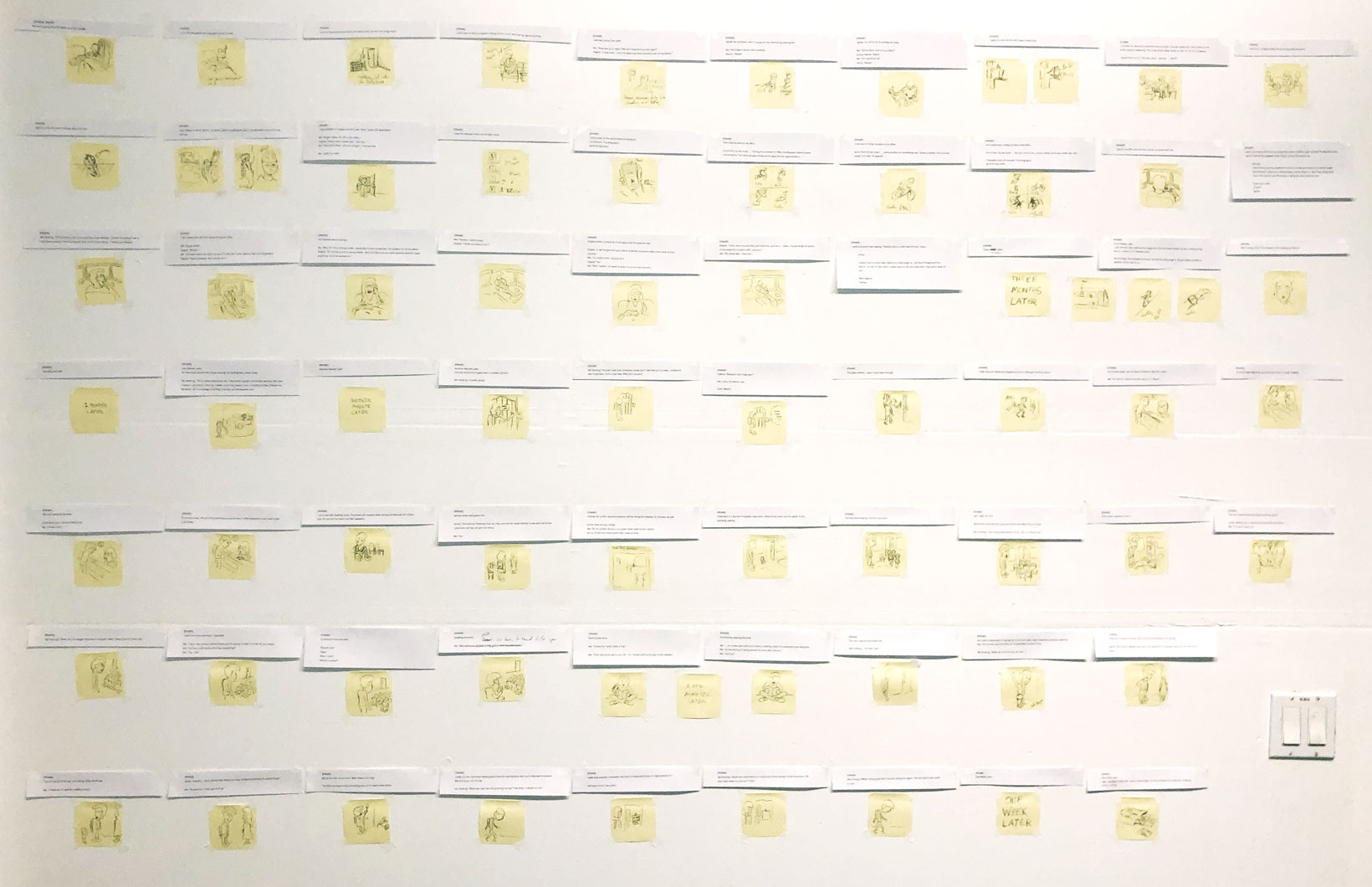 Draft storyboard of the short story on my office wall.
As I continue to develop the biographies for each character of Chasm Moon (which is taking way longer than I expected), I’ve decided to write and illustrate a short story for practice. In this short story I’m using Joesph Campbells’s Hero’s Journey as an outline—the same outline I will use for the larger story of Chasm Moon.

The short story is about a time I went and read my book to first graders. It’s an amusing little story of about 75 panels. One of the main reasons for doing this practice story is to see if my process of sharing backgrounds and similar poses for the characters will work. So far it seems to be.

Let me show you how I’m going from script, to thumbnails, to rough sketches.
Here is the Script for a Four Panel Scene
FRAME 1
Classroom is a typical first grader classroom. None of the chairs are for adults so I’m standing, waiting.
FRAME 2
The kids start flowing into the classroom.
FRAME 3
I’m surprised at the amount of kids. Me thinking: “I was expecting maybe 10 kids. This is a whole mob.”
FRAME 4
I get really nervous. More kids come into the classroom (there are about 50 or so kids).
Quick Thumbnail Sketches 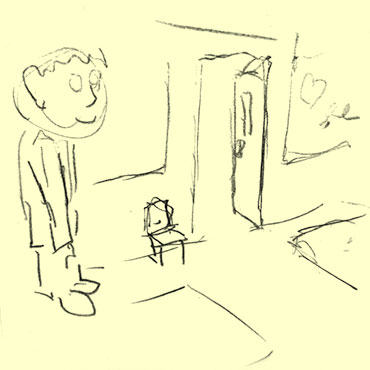 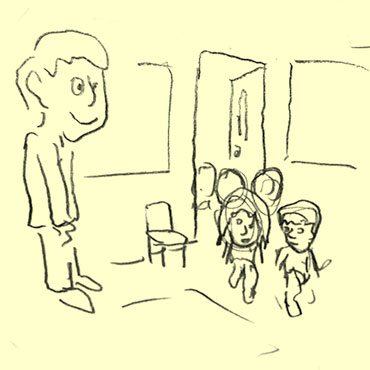 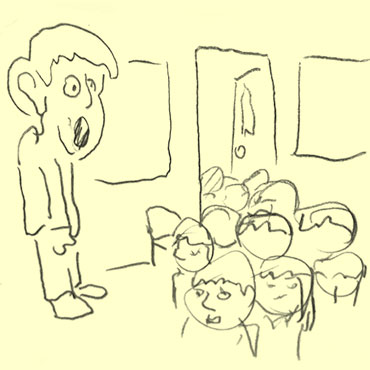 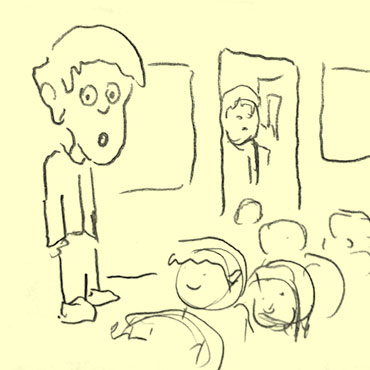 Next Step is to Workup the Various Elements into Rough Sketches 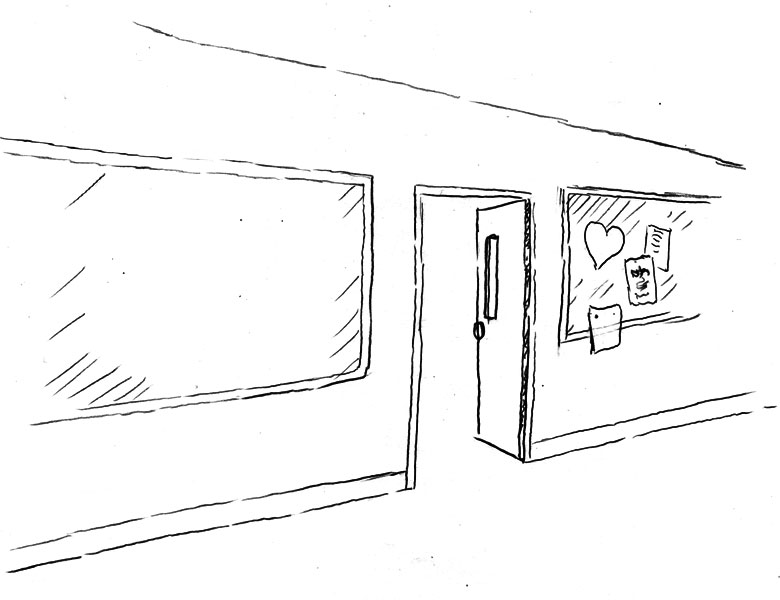 The first one is the background 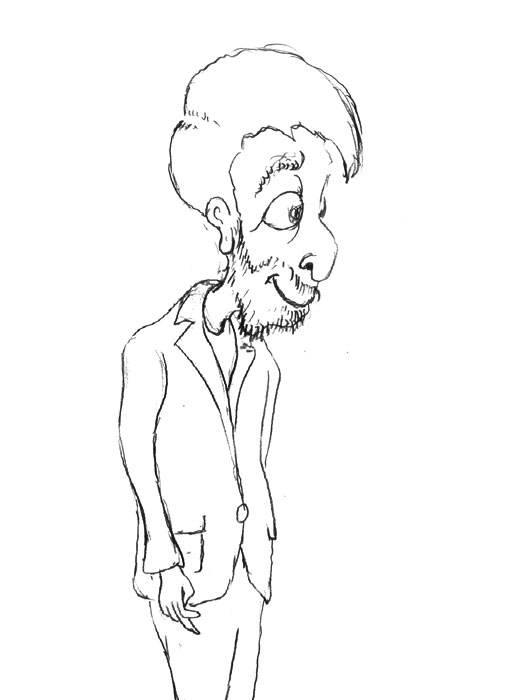 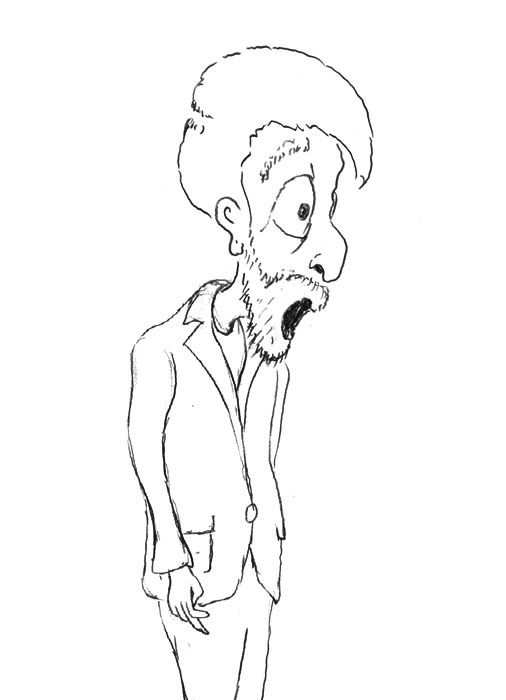 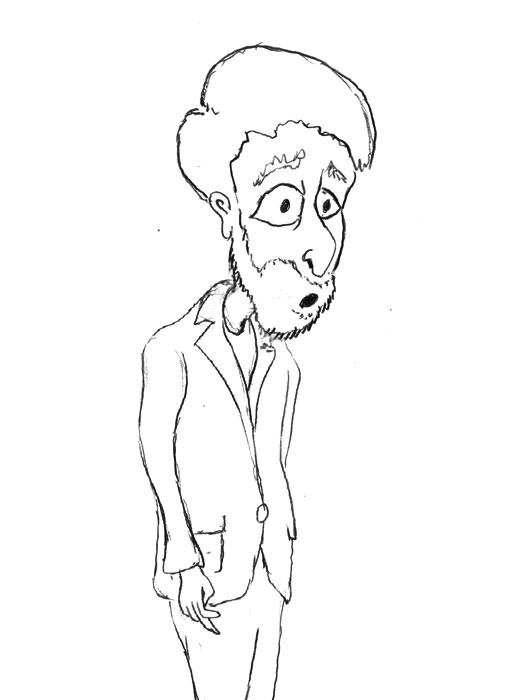 Then, create the main person and the different facial expressions. In this case there are three. 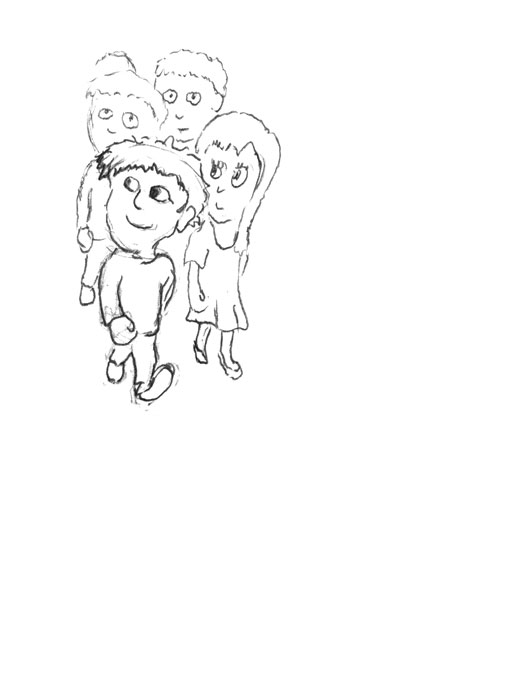 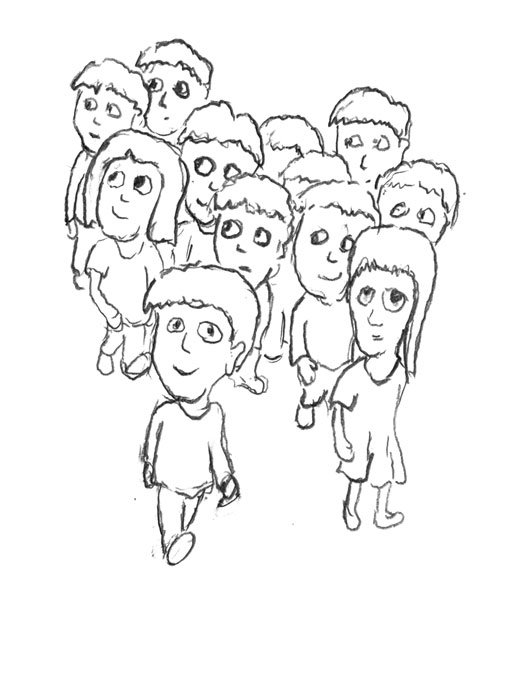 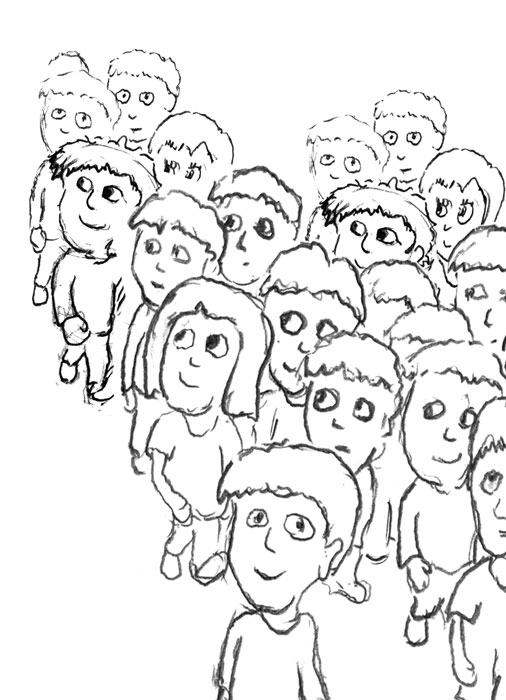 Next, I add the kids streaming
The Final Four Panel Rough Sketches 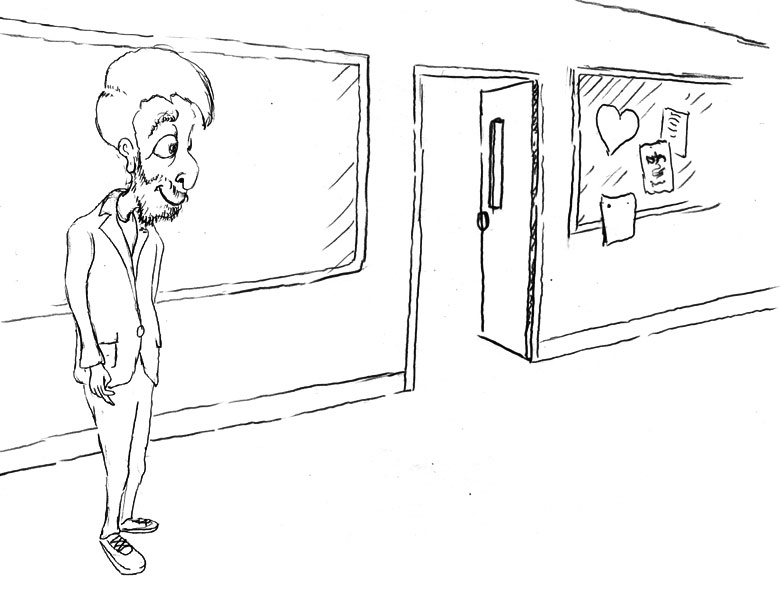 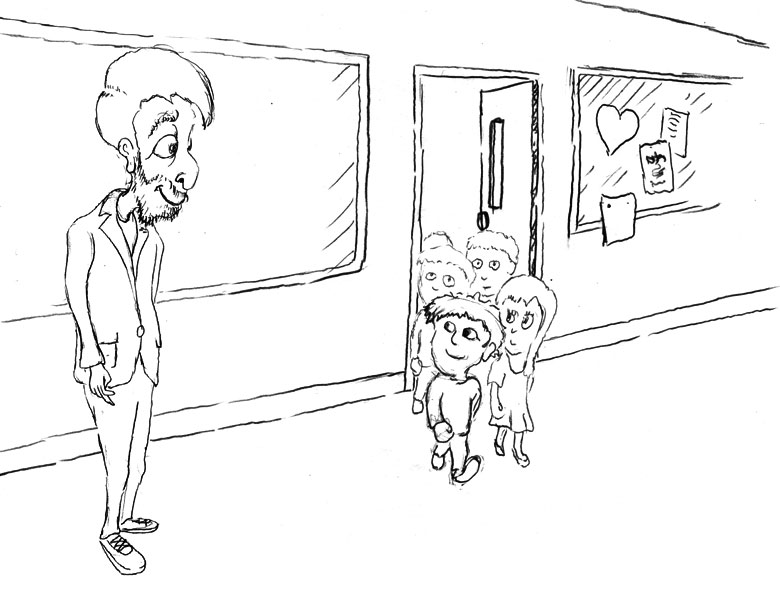 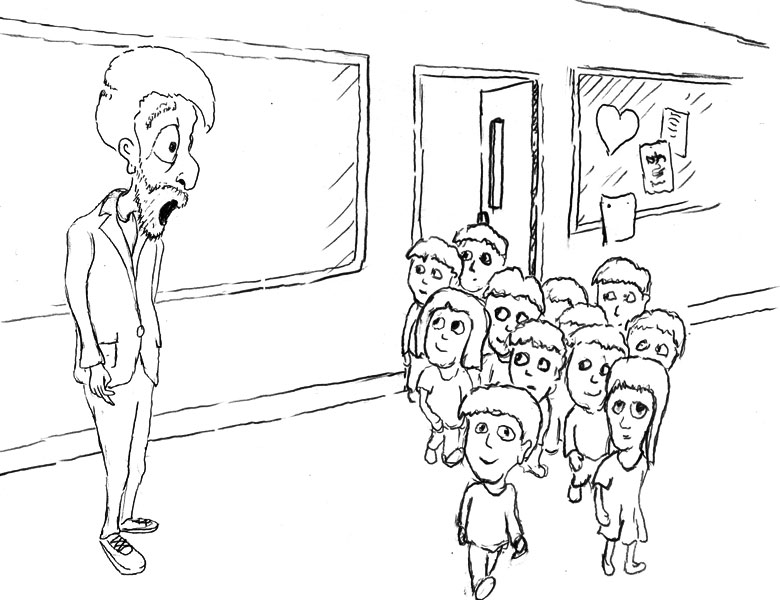 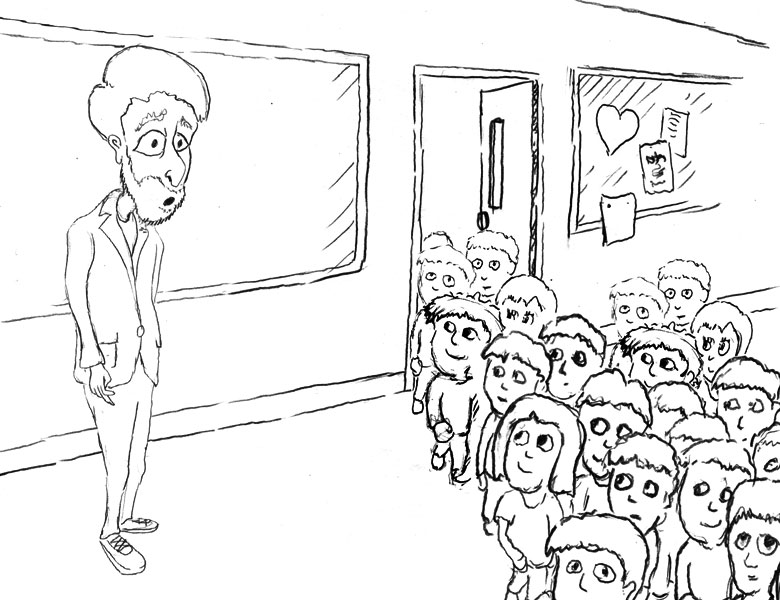 Notice only thing that has changed is the facial expression on the person and the kids. While these are only rough sketches you can see how this process saves a tremendous amount of time.

There are a bunch of timesaving techniques I plan on using for the development of my graphic novel. Far too many to get into with just one post. But, I hope this gives you an idea on how to go from script to rough sketches.

My 2020 Graphic Novel Reading List
I read. I read a lot. Normally, I have at least three books going. One is always a graphic novel, while the other two are a novel and a biography. This year with the shelter in place order I’ve read a mind boggling 57 were graphic novels (see the list below).
2020 Graphic Novel Favorites
It’s hard to pick a favorite, but if I had to suggest one it would be Slaughterhouse-Five by Ryan North. This graphic novel takes Kurt Vonnegut’s classic and creates a wonderful illustrated version. The drawings are fantastic and the story, well it doesn’t really get much better than Kurt Vonnegut. So it goes.

My next suggestion would be The Loneliness of the Long-Distance Cartoonist by Adrian Tomine. Any artist will immediately connect the book design with the subject. And Adrian’s drawings are simple, but detailed as well. Not an easy task to pull off. The self-deprecating humor may not be everyones cup of tea, but the story arc is perfect.

Others I like either more for their illustration style or the storyline. Either way I don’t think you can miss when it comes to graphic novels, although I’m a self-admitted graphic novel junkie.
The List
Blacksad (Blacksad, #1-3)
By Juan Díaz Canales

Can't We Talk about Something More Pleasant?
By Roz Chast

Cats of the Louvre
By Taiyo Matsumoto

The Collected Toppi Vol. 1: The Enchanted World
By Sergio Toppi

The Complete Maus
by Art Spiegelman

The Contract With God Trilogy: Life on Dropsie Avenue
By Will Eisner

The Loneliness of the Long-Distance Cartoonist
By Adrian Tomine

Slaughterhouse-Five, or the Children's Crusade
By Ryan North

Through the Woods
By Emily Carroll

Watchmen: The Deluxe Edition
By Alan Moore
Have a very happy New Year!

For the last few weeks, I’ve been busy working on the short story test project. The idea is to try out some drawing processes as well as go through the entire story development.

In this post I want to build upon my earlier post Test Balloon and show how I go from really rough pencil sketches of the panels to final black lines with speech bubbles for the whole page (color and shading are still to come in a later post).
Pencil Sketches

In my earlier post, I showed the thumbnails for each panel. The next step is to draw really rough sketches of the entire page. This is where I start to make room for the speech bubbles.
Red Lines

With the sketches complete, I can take them into the computer and start creating the red lines. During this process I clean up each drawing and create and missing parts.
Red Lines with Text

Next, I finesse the placement of the red lines and speech bubbles. Once they are in place I can start on the black lines.
Black Lines

Then, I create the black lines which will appear in the final drawings.
Finally, I will add the colors and shading. At that stage the backgrounds will start to come alive. But, before I can get there, I need to do the above process for all 14 pages of the short story.